I have a friend, who for reasons I’ll never understand, decided to beat Resident Evil 4 with only a knife.

Challenging yourself is one thing, but that, to me, sounded like a one-way ticket to an aneurysm.

“Fan made challenges,” like my friends, have been created by gamers for years.

Gamers are always looking for interesting ways to increase the difficulty of their favorite games.

In April, I accepted a brand new challenge I’ve never embarked on before: preparing for my first professional photo shoot.After a successful winter bulk, I hadn’t planned to get extremely lean for summer. But I couldn’t half-ass this opportunity.

Looking at the calendar, I realized I had 6 weeks to prepare. Cue the “time is running out” music from Super Mario Bros.

As opposed to last year, where I took a conservative 5 months approach to fat loss. I needed to get aggressive this time.

Which meant, I would need to use all the “power-ups” I could get my hands on.

Stacking these power-ups with a calorie deficit will boost anyone’s metabolism.

None of these power-ups require you to drop gold coins on supplements. All five of these are items you can find in your kitchen, right meow.

5 Fat Loss Power-Ups That Will Ignite Your Metabolism 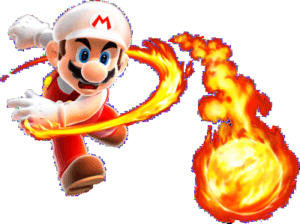 1. Cinnamon (One scoop in my oatmeal & post workout shake)

According to a study published in the Journal of the International Society of Sports Nutrition, Cinnamon extract helped improve body composition by increasing lean body mass and decreasing fat. A later study also showed that cinnamon helped limit insulin resistance and fat deposits.

Insulin resistance can hamper your fat loss plans not to mention cause issues later in life.

For an added boost to your metabolism. Add a spoonful of cinnamon to your breakfast or shake.

Dehydration can affect your workout and cause it to be less than stellar.

Not drinking enough water, though, prevents your liver from functioning properly.

Dehydration can blunt your liver’s ability to break down fatty acids for fuel.

By increasing your water intake, you help your liver become more efficient.

Here’s something you may not know. When you drink it ice cold, your body has to ramp up its metabolism to bring the water to 98.6 degrees.

The thermogenic process for one 16 ounce glass of water burns about 18 calories.

Break out the calculators my nerdy friends, it’s time for some math.

If you drink a gallon of water a day — that’s 128 ounces — you’d burn an extra 144 calories from the thermogenic process.

Over the six weeks I’ve been dieting, for this photo shoot, that means I’ve burned over 6,000 extra calories from drinking cold water alone.

There are 3,500 calories in a pound of fat. Which means I’ve lost around an 2 extra pounds of fat from guzzling gelid water. #winning

Converting your 8 ounces of chicken breast into amino acids is an expensive caloric process.

20-30% of the calories from the protein you ingest are spent to digest it.

Plus, while in a calorie deficit, you want to keep as much lean muscle mass as possible.

That’s because muscle is your metabolism.

Increasing your protein intake will not only burn more calories through the digestive process (+10 to Fat Burning).

But you’ll prevent your body from attacking your muscle for energy while you diet.

Since I was on an aggressive, 800 calorie daily deficit, the extra protein kept me fuller longer, helped me maintain more muscle mass, and ignited my metabolism hotter than the fires of Mordor.

4. Hot Sauce  (Put That Shit on Everything)

Spicy food not only tastes amazing, but it helps you burn excess body fat.

Hot sauce, jalapenos, chili peppers, or any pepper that turns you into Charizard can increase your metabolism by up to 30%, according to a study performed by The British Journal of Nutrition.

A study done by The Public Library of Science found that men who ate meals with added capsaicin pepper metabolized food so efficiently that they ate 25% fewer calories. All without feeling massive amounts of hunger later.

Protein, as I said above, is the most important macronutrient when you’re dieting for fat loss.

Combine protein, like egg whites, with a heaping dose of hot sauce. And that you have one hell of a fat loss power up.

5. Caffeine (Coffee, the Nectar of the Gods)

Here’s an interesting fact about coffee. It’s the most consumed form of antioxidants in the Western diet. Yes, it outranks fruits and veggies.

Your nervous system, when stimulated by caffeine, sends signals to your fat cells demanding they break down for use as energy.

That rush you feel shortly after drinking your morning Cup o’ Joe happens because caffeine increases the levels of the hormone Epinephrine (aka Adrenaline) in our blood.

Epinephrine travels alongside the Magic School Bus in our blood, thrusting itself into our fat tissues. Once it enters your fat cells, it assists in breaking down those cells, sending them into your bloodstream for energy.

That’s a simplistic description of how caffeine mobilizes stored body fat and makes it available for use as free fatty acids in the blood.

Caffeine also increases our resting metabolic rate — the calories you burn while sitting on your ass.

Studies have shown that this increase from caffeine can be anywhere from 3-11%.

If you’re really lean, a few studies have shown that this increase can go up to 29%.

There is ONE issue, though.

If you’re a constant coffee drinker, you’ve probably grown immune to these effects. So to get the glorious effects of coffee again, take a week or two off the caffeine and then cycle back on it.

Fat loss is a battle and most of the time it’s challenging enough without extreme deficits like mine.

But there are some power-ups that can assist you on your Quest.

As long as you’re in a calorie deficit, these 5 items can help you burn extra fat without increasing the challenge.

It’s dangerous to alone. Take these fat loss power-ups with you and stand triumphant.