I was in SC last weekend for one of my oldest friends weddings. A few days of relaxation and celebration and plenty of reminiscing. Like that time, we played golf and I had to succumb to THE RULE.

Waiting for the bride and groom to finish with their photos, I had the chance to catch up with one of my old friends, Joel.

Over a few whiskeys, we geeked out over the upcoming Captain America film, his current obsession with Marvel Unlimited, & his love for the craptastic football team he cheers for out of Cleveland.

At one point, Joel mentioned he had been drinking smoothies for the last few months each morning. Which then prompted him to look at me, and ask: “smoothies are healthy, right?”

Health smoothies have been the rage for years now. I freaking love a good smoothie. And creating a few superhero smoothies not only help me look like a superhero, but feel like one, too. Some of my clients, who don’t like heavy breakfasts like oatmeal or bacon and eggs, prefer smoothies.

A good smoothie gives them something to start their day with but doesn’t make them feel sluggish.

Since I’ve gone back to eating breakfast, I’ve been 100% in on oatmeal. But there are mornings I have clients super early and don’t have a chance to eat breakfast until 8 or 9 am. In those situations, I’ll opt for a smoothie. Like all things in my life, I have to add a little geek flair to things.

In honor of my good friend Joel, here are some marvelous superhero smoothies that will knock out your hunger.

If you need a smoothie that will smash your hunger until lunch, this is it. Packed full of protein and fiber, this is the best option for anyone who doesn’t want a heavy breakfast but wants to feel full till lunch.

1 cup of milk **for calorie/macro count I’m using whole, of course, that will change if you use anything else** 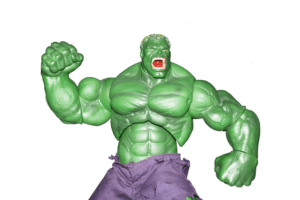 You’re looking for something a little more visually appealing — a smoothie with some color and POP.

A smoothie with style and brashness like Tony Stark. This one is a lot of fun to make, but if you’re in a rush and don’t care about the presentation, just blend it all at once.

Hit blend and then place the red mixture in a glass and set to the side.

Clean out your blender and then combine:

Once both mixtures are complete, scoop ⅓-½ the red mixture into a clean cup. Then layer on the gold mixture. Finish your creation by adding the rest of the red mixture on top.

*This recipe was found on Feeding the Troops, but with a few tweaks of my own*

Need a smoothie fit for a Super Solider? But also packed with all the best flavors America has to offer?

Captain America is my homeboy. When I need a shake to keep me going for a few hours, this baby blocks hunger shield made of vibranium. 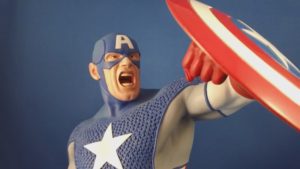 The first recipient of the Most Awesome Human Alive award should be Paul Rudd. He can win the first year, I’ll take the second year. Totally cool with being second to Paul Rudd.

Since I have a giant man-crush on Paul Rudd, I had to give Ant-Man his own superhero morning smoothie.

Once called, “the fruit of the gods,” persimmons sweeten and flavor this godly concoction.

This is by far the most calorie-heavy smoothie on the list. But when you’re out fighting Frost Giants all day, you’re gonna need all the energy you can get.

If you want to become a huge jacked man then you’re gonna need to recover quickly after your workouts. This is my standard post workout shake that I use after every single workout. 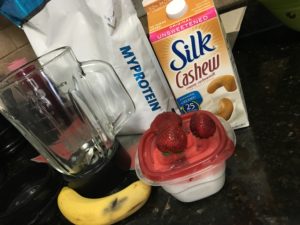 Smooth Out Your Mornings

Are smoothies healthy? If made to fit within your calories, then yes they can be. Always track and be cautious of what is going into your smoothies. Your concoction may taste like heaven, but packing in 900 calories is easier than you think. Start your day with one of these superhero smoothies. Or down one post-workout.