Time for pumpkin, jean jackets, and drives to the mountains to watch the changing leaves.

As the winds of winter slowly pour down from The North, you need something that provides a little more warmth than the light lagers and pilsners of summer.

Something that puts hair on your chest and warms the cockles of your heart.

For beer enthusiasts, that means porters, stouts, and delicious pumpkin ales. But what about whiskey drinkers?

Whiskey doesn’t change much month to month, outside of a few limited edition bottles.

Still, there are a few whiskeys that are perfect for sipping on chilly autumn nights. Not only do they provide a bit more of a kick than beer, but their taste profiles scream everything you love about the Fall.

Here Come the Men in Black

I don’t like Jim Beam. Never have. But the Black Label changed my mind.

Standard Jim Beam has that toasty oak flavor with hints of vanilla, spice, and pepper. Not bad tastes at all for a bourbon. But again, not a big Jim guy.

The Black Label, though, may now have a prominent position on my shelf. Here’s how Master of Malt describes the Black Label:

The nose is quite complex and well-balanced. There are notes of crème anglaise and butterscotch, mixed dried peels and nuts, a hint of aniseed and lovely cereal sweetness. The palate is full and thick with fruit. There are notes of vanilla fudge and honey, cereal sweetness, plenty of rye with a hint of cooked fruit. The finish is of good length with a touch of toasty oak spice.

Jim Beam Black is smooth, and even for a seasoned whiskey drinker like myself, there was no kick. No bite that made the corner of my mouth jerk up toward my ear.

You can’t beat the price of this bourbon either. Here in Georgia, this bottle retails for around $22. Depending on where you live in the US (not sure if you can get it outside of The States, yet) this bottle can retail from $22-30. So if you’re in the market for a whiskey under $30, give this one a try.

the next few whiskeys, ain’t cheap. But they are delicious.

Let’s talk Scotch for a minute.

Talk about putting hair on your chest and warming your cockles, the Scotch I’ve chosen is one of the peatiest Scotches you can buy. But on a cool Autumn night by the fire, not only will you have the smell of wood around you, but you’ll taste the smokey goodness of this Scotch on your tongue.

Distilled on the Inner Hebridean Islands, Islay-style whiskies are famous for their peatiness. The peat used in these Scotches provide a burnt, smoky, earthy taste. For the uninitiated, these tastes are huge turnoffs.

But for the chosen few, whom the gods smile down upon, peaty Scotch is bliss. Ask Ron Swanson.

Listed on Airows as one of the top whiskeys for 2016, the Laphroaig Lore doesn’t disappoint.

I got my hands on this at Man Camp back in September. And since no one there enjoyed the taste, I was told I could bring the bottle home.

Packed with smoky flavor, hints of vanilla, seaweed, salt, and a burnt sweetness that sits on your tongue until your next sip, this is a whisky perfectly crafted for cold nights.

The picture below, by the way, is from the most kickass Instagram account online. The Scotch Trooper combines his love of Scotch with Star Wars. So, follow him.

At $130 a bottle, The Knob Creek 2001 Limited Edition Bourbon this isn’t a cheap whiskey. But goddamn is it good.

Those who stayed for the whiskey tasting event the final morning of Man Camp all agreed: this was our favorite. 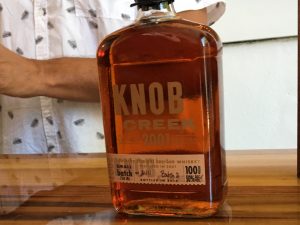 Knob Creek bottled this whiskey at 100 proof and then aged it for 14 years. The longer aging provides a larger and more robust flavor palate than any other bottle of Knob Creek.

And this is one hell of a smooth bourbon. Perfect for anyone who loves drinking their whiskey neat.

Individuals who suffer from Lexical-gustatory synesthesia, claim they can taste the words they hear. But if you could imagine what the beauty of fall foliage tastes like, that’s how I’d describe Knob Creek 2001 Small Batch.

This whiskey recommendation came from one of my online clients. And what’s funny about this whiskey is that when you think of great whiskey, you never think about it coming from Utah.

One of the best distilleries in America today is based in Park City, Utah. High West Whiskey is the first distillery legally allowed to operate in the state of Utah since the end of prohibition. And they’re making some of the best tasting whiskey in America.

Tell me if this has ever happened to you.

On vacation, while eating a local restaurant, you have the most delicious dessert in your life. Sitting there, slowly munching on each morsel, you try and piece together the ingredients.

Do you taste cinnamon? Brown sugar? Ginger? Is that a hint of mint or orange?

For days, you rack your brain trying to ascertain what you’ve eaten. You tried to get the recipe from the owner. But they refused. Claimed it was a family heirloom, passed down for ten generations.

Determined to recreate this masterpiece, you slave away in the kitchen one Saturday trying to replicate the dessert.

You fail. Realizing that you’ll never be able to recreate the experience at home.

That’s what happened to the owner of High West.

David Perkins was on vacation in the Islay region of Scotland. The Bed and Breakfast he stayed at served him a syrup made from sugar and peated whisky, that they then poured over a honeydew melon.

Perkins was so enamored by this unique taste, that he came back to America with one goal in mind: create a blended sweet bourbon that included the peaty taste of Islay whisky. But he wasn’t going to stop there.

To make this whiskey stand out, Perkins blended an 8-year-old Scotch with a 6-year-old bourbon, and then for good measure, added in a 5.5-year-old rye whiskey—thus creating one of the most distinct and mind-blowing whiskeys on the market.

When I mentioned to my email subscribers that I was writing this article, my client Jeremy suggested I had to include this whiskey in my list. Here’s how Jeremy describes the High West Campfire.

It’s very rich, very warm, very very very oaky whiskey. It’s so flavorful I would 100% suggest this as starter bottle because the flavors take up so much space as opposed to lighter whiskeys (like Suntory Hibiki IMHO ) that leave a strong alcohol burn / flavor.

The last whiskey is one you can find at any liquor store in the country. It’s nothing super exciting. But it’s the one whiskey that captures all the flavors of Fall and reminds you of pie.

It’s the perfect whiskey to sip on while you have Thanksgiving dinner and watch football.

The only difference between this brand of Makers and their flagship bourbon is that with Makers 46, they add seared French oak staves into the barrels which provide a spicy flavor to the whiskey.

Holding this bourbon on the tip of your tongue, you’ll taste hints nutmeg, allspice, cinnamon, caramel, a sweetness reminiscent of hot apple cider, vanilla, and wisps of maple syrup. It tastes like all the best desserts grandma makes at Thanksgiving.

Whiskey is good no matter the season. But if you’re looking to enjoy the tastes of Autumn or want something to warm you up on a cold night, look no further than these four whiskeys.

If you give any of these a try, let me know. Or if you have a whiskey that you think is perfect for Fall, let me know in the comments below or via email here.