This article had started with some long winded intro about how fucking disappointed I’ve been with the current console cycle.

But honestly, that’s not why you clicked on this link.

You’re here to read about a list of kick ass games that Sony and Microsoft should have remastered or remade on their four-year-old systems. Because at first, that’s all the Xbox One and PS4 were good for, remastering games that were barely out of diapers.

And besides the obvious reasons for why that pisses me off—chiefly, that game companies already siphoned enormous sums of money out of me for games like Grand Theft Auto 5, Skyrim, The Last of Us, Gears of War, and Uncharted to name a few—now you expect me to get excited to play the same (great) games again but with “updated” graphics?

Look, I loved Skyrim. I loved Uncharted and Grand Theft Auto 5. But if I buy a new system, I expect new games, not a bunch of games I played just a couple years ago. That’s not how nostalgia works.

Instead of trying to get gamers dick hard about games that were the best games of 2011 or 2009, you—Sony and Microsoft (even Nintendo)— failed to remaster games that would’ve excited old school gamers (drowning them under a tsunami of nostalgia) and made them want to buy your new-fangled consoles.

Damn it. I said this wasn’t going to be a long intro and here I am 260 some words deep and not to the point. Fine.

Here are the 11 kick ass games Sony and Microsoft should have remastered. Technically, a spiritual successor to Road Rash called Road Redemption has been in development since 2013.

After a Kickstarter campaign, the game was supposed to be released in the summer of 2014. It was not. And as of now, it is still TBA for 2017.

I’m not a developer, and I don’t understand all the tech that goes into making a game happen. So I’m just mouthing off as a fan and gamer.

But what the fuck is taking so long?

We’ve seen four different Call of Duty’s in four years—each one selling less than its predecessors year after year—and remakes of games that were already HD. So why am I not able to drive a motorcycle and bash people in the face with a sledgehammer?

The gameplay footage of Road Redemption below is enough to take me from six to midnight. So, um. Yea, gaming industry. You’re failing. This should have been done years ago.

This is hands down the greatest—and most fun—football game ever made. So why has this game not been remade in over 25 years?

NFL Blitz was an amazing game, there’s no doubt about that. But MLF allowed you to play in space with aliens, skeletons, robots, and trolls. And to make the game even more awesome, each stadium had its own special hazards that could kill members of your team or the opponents.

And each team had crazy ass audibles that you could call which were far dirtier than deflating a few footballs to beat the Colts. Including the option to bribe the refs, where they’d call a “fake” penalty on your opponent, like a 5-yard penalty for crying.

Here’s what made Mutant League Football the best game ever: you could win the game by killing the opposing team’s players. Yes, you didn’t even need to outscore the other team. You just needed to tackle more of them into landmines, fire pits, off the edge of the field and into space, or call your team’s special audible that killed the QB in one hit.

Below is some video of a pre-alpha build for Mutant Football League—supposedly—due out on PC in 2017 and 2018 for Xbox One and PS4.

25 years after the first game, is far too long to wait. This should have been done ten years ago.

Back in the day, Lucasarts created some of the best video games on Earth: Secrets of Monkey Island, all the Star Wars games, and Zombies Ate My Neighbors.

Zombie games are one of my favorite genres. Left 4 Dead was amazing. Dead Rising was a lot of fun. But neither of them compare to the ridiculousness of Zombies Ate My Neighbors.

My cousins and I couldn’t stop playing this game. We may have played it more than Mario Kart and Zelda combined. And though you can download the original on Nintendo’s Virtual Console, I still have no idea why this hasn’t been remade?

Because Disney shut down the video game development side of Lucasarts. And I doubt The Mouse will want to release any game that involves zombie, werewolf, and vampire murder. Goddamn it Mickey.

I don’t have kids. But if I did, I wouldn’t send them to time out for punishment. I’d sit them down in front of Battletoads, with implicit instructions that the only way to get out of timeout is to beat the game.

They’d either stay in timeout forever, or they’d apologize and beg for the torture of this game to stop.

A remastered Battletoads would be huge. And yes, I know Rare released it on their compilation, Rare Replay, for the Xbox One. But the game only took up half the screen; plus, that border is obnoxious. And though the original is fun, in a sadistic kind of way, I’d rather have a remastered Battletoads to play than another broken ass Gears of War.

Since I’m already on the Rare bandwagon, we can’t forget about Conker. This is still, hands down, the most expensive N64 game you can buy on Ebay. Not kidding, I’ve seen this game sell for damn near $200 before.

And yes, Microsoft and Rare did remake the original 64 game in 2005 for the original Xbox, but it deserves to be re-released in HD—with none of the original humor censored.

So I guess this would be a remake of a remake? But who cares. Conkers Bad Fur Day is the most ridiculous game ever made. Not only for its adult humor or smart ass wise cracks that Conker makes to the player as he breaks the fourth wall, but the multiplayer was, next to Goldeneye, the best on the 64.

It deserves to have a modern remake for the Xbox One.

I don’t need to say much more here. This is one is pretty much a no-brainer. But it won’t happen. And if it did, EA would probably muck it up. So maybe it’s best left as a fond, but distant memory.

There were a ton of amazing games that disappeared into the background on the Gamecube. But Eternal Darkness: Sanity’s Requiem was a literal mind fuck.

You can read what the story is all about here. But what made this game such a mind fuck is that the game employed what it called, the “sanity meter.” And as you roamed through the game—the hub of the game being your character’s family mansion—if your sanity meter began to get low, the game would do really crazy shit; it was designed to represent a reflection of the main character’s grip on reality.

The lower the meter dipped, the more health you’d lose.

At the same time, you might notice that all of a sudden the camera angle changed. Or that you’d suddenly hear cries, whispers, or unsettling sounds emanating from the speakers.

The game even broke the fourth wall and would give you a “blue screen of death,” making you think the game/system had malfunctioned. It had not. But it was designed to pull you in and mess with your own sense of reality.

Here’re a few more of the crazy things that could randomly happen in this game:

This game was genius. Terrifying. But genius. And a remake by Nintendo, specifically on The Switch, could grant them a ton of opportunities for even crazier mind fucking moments.

Do I even need to go any further here? No. I don’t.

Give us Earthworm Jim. The end. 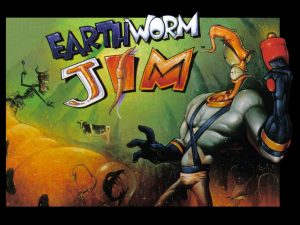 Wait, what? How in the hell could I include (arguably) the worst game ever made? Well, for one, it deserves to be remade. Hear me out, though.

Until Rocksteady came along with Arkham Asylum, Batman games kind of sucked. So who’s to say that someone—cough, Rockysteady, cough—couldn’t make a good Superman game?

Plus there are a ton of Easter Eggs in Arkham Knight that allude to the fact that Rocksteady’s next game might include The Man of Steel.

The premise is simple: you assume the role of a deer named Bambo who hunts humans in the same way you’d hunt deer in Deer Hunter. But with a whole hell of a lot more jokes about rednecks.

Five games were made in the series. It was nothing Earth shattering gameplay wise. But it was a whole hell of a lot of fun and one I’d love to see updated, especially, in today’s world.

Nintendo, why in the name of all things holy have you not remade Dr. Mario?

You probably expected something epic at the end and not Dr. Mario, didn’t you? Well, this is my list after all and I fucking loved some Dr. Mario.

Actually, a remake of Dr. Mario would be a great successor to Mario Run as a mobile game. So, um, Nintendo get on that.

If you had it your way, what games would you want to see remastered or updated for this console generation? Let me know in the comments below.