But you know what else sucks? Eating food that tastes like crap.

Yea, I’m looking at you kale. And tofu. And lentils.

Still, when you’re trying to get rid of all that belly fat you acquired over the last decade (or two….or three), you assume that you have to eat nothing but boiled chicken and steamed veggies.

No more tasty food for you, right?

Wrong. Dieting doesn’t mean you have to suffer through eating food that’s about as enjoyable as a Uwe Boll movie marathon.

But how do you make food taste better if you can’t drown everything in butter and oil like your grandma did?

Yes, butter and oil both provide massive amounts of flavor and will always make food taste better no matter what.

But they’re also enormously calorically dense. One tablespoon of each carries anywhere from 11-14 grams of fat.

And if you ever watched your grandma cook, you might have noticed how extremely liberal she was with her use of oil and butter.

Fat loss does require some conservativeness on your part. And since oil and butter are super easy to over-consume, when it comes to cooking on a diet, there are better ways to make food taste better without adding calories.

When Constantinople finally fell in 1453, it disrupted the trade routes on the Silk Road.

And in that day, traversing Asia by foot was a death wish. Dangerous terrain, disease, and raiders (and not the kind that look for lost arks) lurked around every corner. So European Royalty began funding explorations to find a faster way to Asia.

Thankfully, today, all you have to do is go to your grocery store to get spices. But humans have been using spices and herbs to make food taste better for millennia.

Spices are the seeds, bark, berry, bud, root, or fruit of a plant.

Whereas herbs are the leafy green part of the plant.

Most of the listed spices above have been highly regarded for their medicinal purposes as well throughout the centuries.

Basil, thyme, rosemary, coriander (aka cilantro), and parsley are some of the most used herbs in the world.

Combining both herbs and spices together creates more flavorful food, without adding any excess calories. And no matter what you’re eating while you’re on a diet: they make food taste better. Plus, herbs and spices are packed full of antioxidants and some, like capsaicin, cinnamon, and turmeric, may aid in increasing your metabolic rate.

Lemons, limes, and other citruses are extremely acidic. The acid from these fruits helps kickstart your saliva production. And that’s why the greatest cooks know that if you want to hit taste buds hard, you need to add a bit of acidity to your recipes. 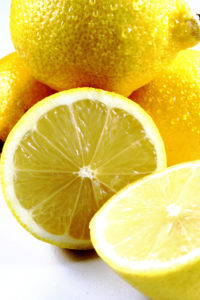 Acids also provide the illusion that they “cut” through fat. That’s why adding a little Balsamic Vinegar to your olive oil is a good idea.

Are you cooking chicken breast for dinner?

Squeeze a little lemon juice on top of your chicken. Then sprinkle your favorite herbs and spices on top. You can’t not make food taste better by adding a little citrus and some cilantro. Of course, you don’t want to drown anything in lemon. Squeeze half a lemon or add one to two tablespoons of lemon juice during the final minutes of cooking for the perfect hint of flavor.

Or you can add a little zest from your citrus by grating the skin of the fruit over your dish. This also aids in reducing the acidity and adds a nice punch of flavor to your meal.

Experiment with more than lemons. Try grapefruit with your fish, orange with your chicken, or lime with your pork.

In almost any vegetable stir-fry you’ll find these three ingredients. But, they’re true power is far beyond stirfrys.

Onions and mushrooms absorb the flavors they’re cooked in, which is why so many dishes include them. Peppers add a little color to your plate. But they also add their own unique flavors to your dish.

Trying to retain as much flavor as possible?

Add a few mushrooms and onions to liven up your meal.

It doesn’t matter if I’m dieting or bulking: hot sauce is my best friend. Plus, if you are dieting, you want to give yourself all the help you can to burn more calories, right? Of course you do, you’re not a crazy person. Well, you’re in luck. Because the peppers used in hot sauce actually promote an increase in your metabolism.

Here’s a super simple way to meal prep and cook a ton of meat for the week with hot sauce: Take 2-3 pounds of chicken breast, toss it in your crock pot, drown those chicken titties in hot sauce, turn the heat to medium, and walk away. A few hours later, you have enough chicken for the week and you did next to no cooking for it.

Snake oil salesmen have been promoting miracle cures against common ailments for ages. For colds, however, my dad swore by whiskey.

Take a shot, mummify yourself in a blanket, and sweat it out overnight: those were his instructions.

Alcohol infused foods seem to be popping up everywhere. But here’s something interesting you may not know. According to a study by the USDA in 1992, anywhere from 15-95% of the alcohol used while making your rum infused cupcakes evaporates.

That means that not ALL of the booze dies and goes to heaven.

According to the USDA study, how you cook the booze-infused food dictates how much alcohol remains behind.

Why does this matter?

One gram of alcohol consists of 7 calories. So, if the wine used in your cupcake had 13 grams of alcohol in it. That means you’d be adding 91 calories (not including any carbs in the wine) to the cupcake. Once somewhere in the woods of 35% of the alcohol cooked off, you’d wind up with around 35 extra calories in your cupcake.

Those numbers aren’t that shocking and, yes, the additional calories added by booze is less than the calories you’d consume if you ate an apple. But, the apple is going to provide, not only macronutrients like carbs and protein, it’s also adding important micronutrients that alcohol doesn’t have.

During a fat loss regimen, you’ll lose more fat if you keep a closer eye on how many liquid calories you consume.

Better yet, if you can drop liquid calories all together and replace them with water, you’ll notice far better benefits.

Food is an important part of your life and to our existence as humans. It’s been at the forefront of bringing families and societies together for thousands of years. For fuck sake, George R.R. Martin writes more about food in his books than anything else. You know, when he actually writes books.

Yes, there are sacrifices you’ll have to make while you lose fat.

But eating bland, tasteless meals? Yea, that’s not one of the sacrifices you need to make. Use these ingredients to make food taste better, no matter your fitness goals.