The sky turned a vile yellow, a sign that Mother Nature was about to vomit a torrent of destruction.

Rain fell on our rental car with the ferocity of an angry God. And like the outstretched arms of a concert audience during a ballad, trees swayed to the rhythm of the wind.

Not the rain, but the wind.

Trees, once wildly blowing in the bluster of the storm, were now motionless, like hands clasped in prayer.

We both knew what this sign meant—and it wasn’t good.

On the morning of February 22nd, 2016, for some reason, I checked the “On This Day” portion of Facebook. It informed that Tanner Baze and I had been Facebook friends for an entire year. 365 days since our bromance began blossoming; what I like to refer to as our broversary.

My plans for the day were simple

Drive to Tennessee —> train a few clients —> then head to Atlanta to meet Tanner, because the following morning we were heading to Austin, Texas for a business meeting with our mentor John Romaniello.

While hitting a swoltastic chest and back day — the perfect way to celebrate a broversary — Tanner floated an idea to me.

“Dude why don’t we leave for Austin tonight? We can grab Chipotle and then hit the road.”

He had me at Chipotle.

So we headed back to his place to scarf down our double steak bowls, and then packed his car.

It was 956 miles to Austin, we had a full tank of gas, , half a dozen energy drinks, it was dark and we were wearing sunglasses.

As we cruised down I-85, heading South towards Alabama we talked about business, training, and the excitement bubbling inside of us for the week ahead.

Our energy was high, we were bonding as friends, and we knew—in the depth of her hearts—that we’d made the best decision to leave and drive all night.

Um, What Was That?

I may have felt the small lurch of his car first. But assumed it was a bump in the road.

Then I felt it again.

It reminded me of that moment where a roller coaster car catches the chain to ascend and jerks backward a smidgen then continues its climb. Except this wasn’t a roller coaster and the lurching began to happen multiple times.

Tanner’s check engine light came on, the RPMs hit zero, and like a body surfer riding a wave to the shore, we coasted to the side of the road.

Tanner and I may consider ourselves savvy entrepreneurs with online fitness businesses, but when the shit hits the fan, we do what every young man does — call their dad.

I could hear the uncertainty and fear in Tanner’s voice. We never vocalized our thoughts but I could see it in his face. We both had the same unnerving thought: what if this car blows up and our lives end in a fiery blaze in bum-fuck Alabama?

His dad could hear the panic in his voice and reassured Tanner that it sounded like a bad spark plug. So I searched Google. And both Google and Papa Baze confirmed that it was (more than likely) the spark plug.

Mr. Baze suggested that we hobble our way into Montgomery and find the nearest O’Reilly Auto Parts store, and in the morning they’d be able to use  their computer to determine the issue.

Seventeen miles from the exit, and according to Google Maps, another 3 miles to our auto parts destination, we puttered into Montgomery, Alabama. To say we puttered along is putting it lightly. Sunday drivers would have been irate at our pace.

Around 1:15 am Central Standard Time, Tanner turned into the shopping center, parked the car, and we exhaled an elephant sized sigh of relief. We’d made it.

The store opened at 7 am. And since spending money on a hotel seemed stupid at this point, our only logical course of action was to sleep in his car.

No Sleep Till Austin

I attempted to sleep for the next 5 hours.

Sleep never came. And when it felt like I may finally drift off, I was awoken by the chill of the Alabama air or Tanner’s beast like snoring.

Morning finally came, and with it good news. Tanner’s car only needed a single engine coil replaced. It seemed fortune had decided to smile upon us that morning because adjacent to the auto store was a mechanic.

Things began to look up. Tanner had a little more pep in his step. And the portly man behind the counter assured us that our issue could be resolved in only an hour or two.

He even offered to drive us to McDonald’s so we could refuel with coffee. (That’s Southern hospitality, folks.)

We declined his hospitable offer and decided to walk instead. A little extra exercise never hurt anyone, right?

As we walked, I could hear a rising tide of hope in Tanner’s voice. This was a minor setback and Texas—his homeland—was still only hours away.

Something Fowl is Brewing

We both seized on this opportunity and sat ourselves down at McDonald’s to write a few articles, answer some emails, and surf social media.

By 10 am, Tanner had received word that two engine coils needed to be replaced in his car and that the repairs would be completed in the next forty-five minutes.

We ordered more coffee, hit publish on a couple articles, checked our emails one more time, and at 11 am, headed back to the mechanic.

As we approached the shop, I could see a solemn look on the mechanics face as he watched us walk up. His eye’s weren’t projecting good news. And I could feel the air thicken with despair as he delivered the coup de grace to Tanner: He needed a brand new computer in his car.

The initial estimate was upwards of $800, plus an additional day or so of work. Staying in Montgomery, Alabama wasn’t an option, we had to be in Austin by the next day—no matter what.

While Tanner paced outside the shop, I sat down and began watching the small TV in the waiting room. What I saw, wasn’t good. The local weatherman was predicting life-threatening severe weather. The kind that cancels school at noon on a Wednesday.

From Montgomery to Mobile, news began to break about after school programs closing, little league games getting canceled, and emergency crews were ordered to go on standby as computer models forecasted the potential for tornadoes.

“Robbie, I found a place that will fix the car. We can get a rental at the airport, and get back on the road to Texas in the next hour”

Into the Heart of the Storm

The time was 1:30 p.m. and Tanner and I had a brand-new chariot to take us all the way to Texas.

Propelled by caffeine, beef jerky, protein bars, and a block of Cabot cheese, our modern Odyssey continued as we shuffled along the Gulf Coast and entered Louisiana.

Until we hit the state line of Louisiana, the sky had remained a dull gray. My hope was the storm everyone was so frantic about in Alabama had decided to go north of our route. February 23, 2016, however, was not a day for hope.

The sky turned a vile yellow, a sign that Mother Nature was about to vomit a torrent of destruction.

Rain fell on our rental car with the ferocity of an angry God. And like the outstretched arms of a concert audience during a ballad, trees swayed to the rhythm of the wind.

Not the rain, but the wind.

Trees, once wildly blowing in the bluster of the storm, were now motionless, like hands clasped in prayer.

We both knew what this sign meant—and it wasn’t good.

Tanner had grown up in the southern tip of Tornado Alley, and as a youngster, I’d wanted to be a meteorologist. And tornadoes were my favorite phenomenon to study.

“Dude we need to get off this interstate, NOW.”

As we neared the next exit, I couldn’t help but play out the worst case scenario in my mind. My eyes scanned the horizon, anticipating that at any moment I would see a tornado heading to intersect our path.

We found the nearest gas station off the exit and parked the car as close to the entrance as possible. We were safe.

Inside the station, dozens of other travelers joined us in escaping the torrential downpour outside. According to Tanner, who had been glued to his phone and the local radar, we were on the tail end of the darkest portion of the storm.

We would be on our way in a matter of minutes.

Or so we thought.

After a few minutes in the store, the clerk behind the desk received a call that a tornado had been spotted five minutes from our location.

Tanner’s tornado skills clicked in and he had already scoped out a place for the dozen or so of us in the store to hide.

[Since Louisiana is awesome and sells liquor in gas stations, I’d scoped out the finest bottle of bourbon should all hell break loose and a tornado bare down on our location. If my story were to end in bum-fuck Louisiana clutching a stranger in a gas station’s ice box, I would be chugging a damn good bottle of bourbon as I died.]

They say that when a tornado comes it sounds like a freight train whistling down the tracks. Standing patiently in the middle of the gas station, Tanner and I waited to hear this cacophony of death. But the whistle never came. And the rain slowly subsided, twenty minutes later, we filled the car with gas and head back to the interstate.

We had seven more hours ahead of us until Austin. At this point, Tanner and I had been sapped of all energy. All we had left to run on was pure unadulterated determination. 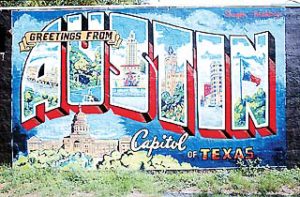 Around 1 AM central standard time, twenty-eight hours after we’d left Atlanta, we hit the city limits of Austin, Texas.

What happened next produced Texas-sized smiles across both our faces.

I don’t know where the energy came from. Our brains were fatigued from the rush of adrenaline, cortisol, and caffeine. But when Tanner and I heard the first second of the song his Spotify playlist had chosen at random, like a choir of angels we belted the chorus to the heavens, smirking like the devil at the humor of life.

We were alive and though I’d been up for nearly forty plus hours at this point—none of that mattered.

After a series of unfortunate events, we dug deep into our souls and as Travis Tritt howled at the moon in the song, Tanner and I were howling to the world: “Yyou tried to fuck us. And we could complain but we won’t. Because we’re alive. And for that, we’re grateful.”

Practicing gratitude in the wake of stressful situations is rarely the first action many of us take. The vast majority of humanity, myself included, are quick to complain and bemoan their situation. Complaining, however, can rewire your brain or as this article here puts its, “literally kill you.”

Our first four minutes in Austin were one of the most cathartic moments of my life.

In an exasperated celebration of survival, Tanner and I sang every lyric as loud and as strong as we could—vibrating from our toes to the crest of our heads. And for four euphoric minutes, our bond as brothers solidified.
As the music faded in the last few seconds of the song, disappearing from the speakers into the night, so did our stress and fears from the day.

We stared up at the enormous dark Texas sky, breathed in one gigantic gasp of the fresh Texas air, and at the same time uttered: