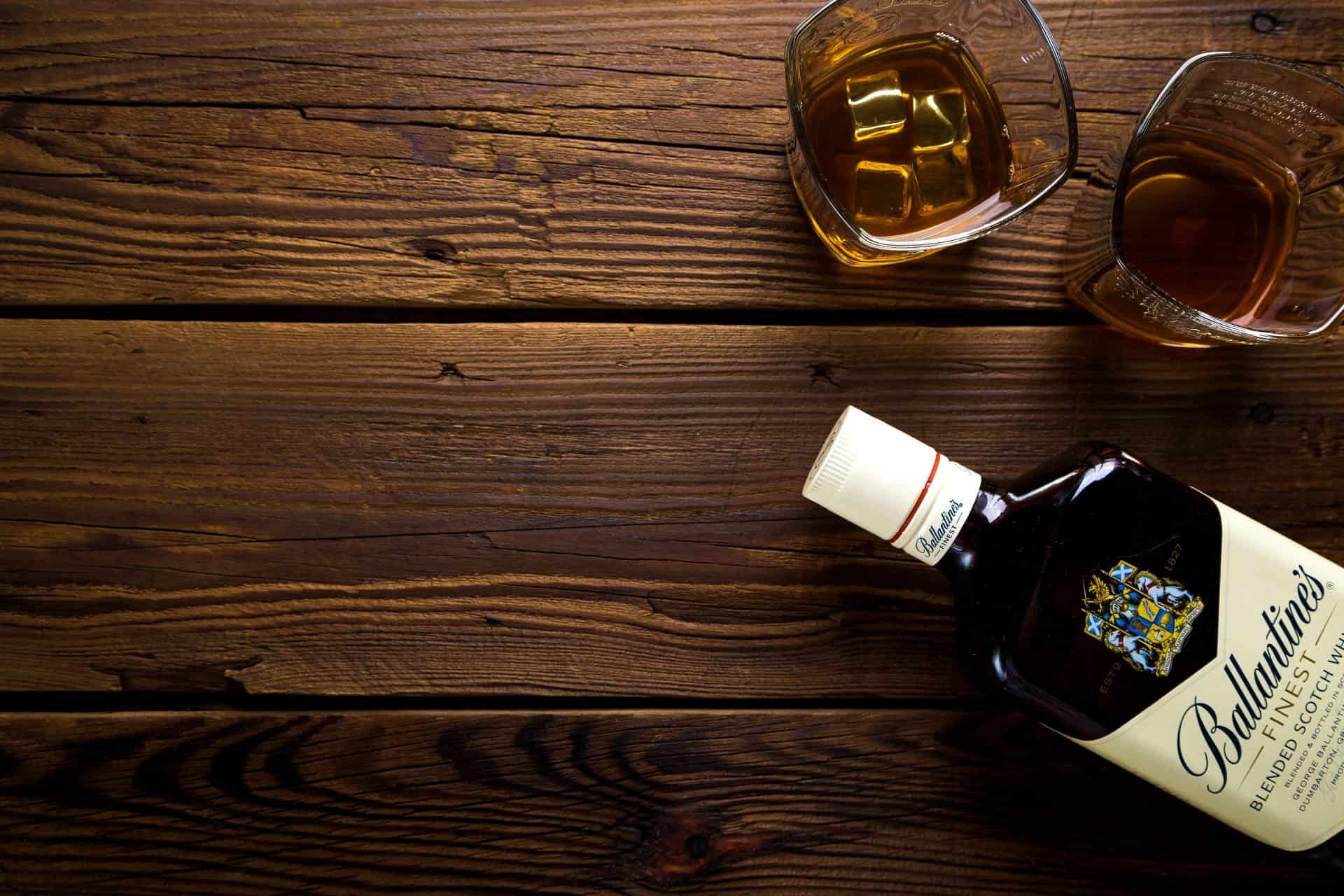 A Beginners Guide on How to Start Drinking Whiskey

Over the last decade, thanks in part to Ron Swanson, Don Draper, and hipsters, whiskey has seen a resurgence. In 2014, the sales of American-made whiskey increased by 7% worldwide.

Whiskey has become so popular that bottles from small American productions that once retailed for $100 now sell for more than $2,000. Yes, I’ve had some of that whiskey and it’s that fucking good.

A few years ago I got bored with beer. You could hand me an IPA from a dozen different breweries and none of them tasted “that” different. Plus, I realized that a $9 bourbon came packed with 2x the alcohol of a craft brew and 3x fewer calories. In terms of dollars spent to get drunk—and calories saved—bourbon had a better ROI.

Whiskey is the Elixir of the Gods.

But when it comes to this delicious libation, where do you start? How do you start drinking whiskey if you’ve never tasted it before? You’ve been drinking Mai-Tais and Daiquiris for years. Both of those are made with white liquors and as Ron Swanson put it:

Here at Side Quest Fitness, I have a goal of helping 100,000 men and women improve the quality of their lives through fitness so that they can kick ass in their 30s, 40s, 50s, and beyond. You should only get better as you age. Much like how a whiskey gets strong and more delicious as it ages, too.

In Irish Gaelic, it was known as uisce beatha (uisge beatha in Scottish Gaelic). The Latin translation from Gaelic means “water of life.” But the English called it whiskey.

Whiskey is made from malted barley or grain. These grains are typically corn, wheat, rye, and sorghum, though any grain (even Quinoa) would suffice.

Once the barley or grain has been through the malting process, it then put into a mash. A process where the grain is added to water and heated. Mashing allows enzymes to break down the starch in the grain into sugars.

The mashing process produces a liquid known as wort. Wort is combined with brewer’s yeast, which ferments and produces ethanol—the shit that gets ya drunk. Forty-eight hours later after the yeast goes all Godzilla on the wort, what you’re left with is known as wash. From here the “wash” is distilled.

After the distillation process, the liquid is then placed into charred oak casks and stored. And this, my friend, is where the fun happens.

The natural compounds of the wood combine with the liquid and give whiskey its distinctive flavor and heavenly aromas.

Many countries around the world make whiskey. But the whiskey the world knows best hails from the United States, Ireland, and Scotland.

Bourbon is the American version of whiskey, made primarily from corn as opposed to barley.

According to United States Federal laws to be considered bourbon, the concoction must follow these rules:

Proud Kentuckians will claim that if the bourbon isn’t made in Kentucky, it isn’t bourbon.

They can keep their pride, but as long as it follows those rules even if it’s made in Texas, Colorado, or Oregon, it’s considered bourbon.

Irish Whiskey and Scotch both have age requirements placed on them, more on that below. Bourbon, however, has no age requirements and products aged as little as three months can be sold as bourbon.

The only difference with Tennessee whiskey, like Jack Daniels, is that before the whiskey goes into the cask, it’s filtered or steeped in charcoal. No distiller in Tennessee will ever refer to their product as bourbon. Which is fine because Jack Daniels is for dumb rednecks and moronic frat boys.

As the old saying goes, “God invented whiskey so the Irish wouldn’t rule the world.”

The Irish know a thing or two about drinking. Hell, they probably start drinking whiskey in the womb. And according to legend, God invented whiskey so the Irish wouldn’t rule the world. Still, they did invent Guinness, Bailey’s, Magners Hard Cider, and whiskey. The oldest licensed distillery in the world is the Old Bushmills Distillery which received its license in 1608.

Irish whiskey, unlike Bourbon, uses barley (malted and unmalted) in its production. This makes Irish whiskey a little less sweet than it’s American (corn based) counterpart. As opposed to other forms of whiskey, Irish whiskey is distilled three times. And to be considered Irish whiskey it must be aged in wooden barrels in Ireland for a minimum of three years.

Scotch is not a boy’s drink. It’s the whisky for men. (Yes, the Scots drop the “e” in whiskey and get a wee bit upset when you spell it with one.)

This is the pinnacle of whisky. You can’t jump from never having had whisky to Scotch. You have to work your way up to it.

Scotch is made from malted barley, water, and yeast. What separates Scotch from others whiskies is the use of peat. Peat is partially decayed vegetation or organic matter found in bogs and mires. The Scots will dry the malted barley over peat fires, a process that takes around 30 hours.

It’s this process that adds the extra kick, or bite, that Scotch comes packed with.

Like Irish whiskey, to be considered Scotch, the whisky must be aged in Scotland for a minimum of three years. By law, it’s illegal to add any additive to Scotch other than barley, water, yeast, and plain caramel coloring.

The people of Canada are extremely nice but their whiskey sucks. The end. Avoid it.

Elsewhere in the World

There are whiskey’s made everywhere in the world. The Swedes, Dutch, Germans, and even the Buddhist nation of Bhutan make whiskey.

Modeled after single malt Scotches, the Japanese began to get into the whiskey came over the last couple of decades. Japanese whiskey has won prestigious awards for its quality and for some whiskey enthusiasts has become more sought after than Scotch.

How to Actually Start Drinking Whiskey

The first time you drink whiskey, and I mean really drink it—not taking shots—sip it and let it touch the front of your tongue; slowly allow it to roll to the back of your tongue before you swallow. Warning: there’s going to be a bit of a kick.

My number one rule for any whiskey drinker: always start with bourbon, then proceed to Irish Whiskey, and then move on to Scotch—the level 100 of all whisky. For whiskey noobs, don’t jump for the most expensive bottle or the one with a fancy sounding name.

Low-moderate level bourbons like Buffalo Trace, Larceny, or Maker’s Mark are affordable and delicious options for anyone who desires to start drinking whiskey. 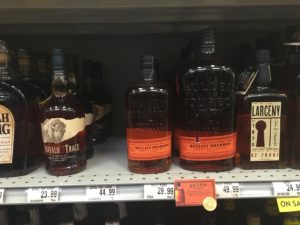 If you’re a level 0 whiskey drinker, don’t try and drink it straight or with ice (on the rocks). It’s perfectly okay for a complete whiskey noob to mix it with something like Ginger Ale. Or if you’re calorie conscious Diet Coke (or my favorite Cherry Coke Zero).

Decided to skip the bar and make it yourself?

Start drinking whiskey with a 70/30 split: 30% bourbon and 70% soda. Each time you make the drink use less and less soda until you develop a taste for the bourbon.

You can also try cocktails like Manhattans, Whiskey Sours, or enjoy an Old Fashioned (the drink choice of Don Draper). 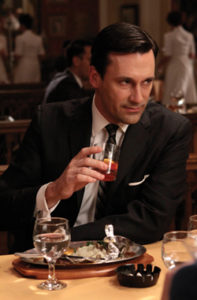 Once you’ve leveled up your taste game and are ready to move away from soda or cocktails, you can move onto drinking bourbon with ice.

Yes, you can drink bourbon with ice. Some people will tell you not to, but if it makes it easier for you to drink it, then enjoy. Unless it’s Scotch, but more on that below. Ice will dilute the whiskey and its flavors, which is why some hardcore whiskey drinkers say you shouldn’t use ice. But for most drinkers, this is the easiest way to curb the “bite.”

However, you don’t want to dilute the fine spirit too much with ice. 3-4 ice cubes are the perfect number for you to use when you start drinking whiskey at home. If you’re at a bar take whatever they give you but always request less.

Once your drinking bourbon on the rocks, I suggest giving the higher priced and mid-high level bourbons and Irish Whiskyes a shot. 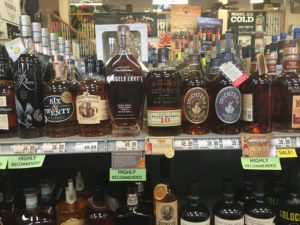 Like you did with your whiskey gingers, slowly remove ice cubes until you’re ready to take the plunge and drink it neat (without ice).

The bourbons and Irish Whiskeys I mentioned above are all great “neat” but the high tiered whiskies: the single barrel, small batch, or aged bourbons like Pappy Van Winkle, Jefferson’s 21 Year, Midleton Very Rare Irish Whiskey, Redbreast 21 Year, Black Maple Hill, these are all best “neat.”

If you’re going to spend $125-$500 on a bottle of whiskey, don’t water down the taste. Get the full experience, I mean you’re spending enough mullah, right?

Once you can drink bourbon or Irish whiskey straight, you’re ready to venture into the world of Scotch.

The Next Level Whisky Drinker: Scotch

Scotch is the one area I get a little pretentious. When it comes to drinking Scotch you have three options:

You may never decide to venture into this level and that’s fine. For some, Scotch has too much of a kick and they don’t enjoy the taste.

If you don’t like Scotch, stick with Irish whiskey or bourbon, but at least give it a try—just never add ice to it.

Aberlour is a great starter Scotch and the first I tell any of my friends to try. Beyond that, you can start with Black Label Johnnie Walker, Glenmorangie 10 Year Old, or pick up a standard Glenfiddich 12 year. 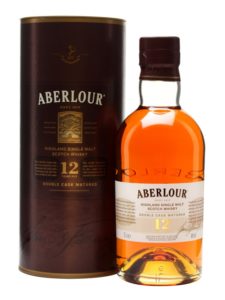 If you’re cost conscious and can find it try Monkey Shoulder. It’s a blended scotch whiskey that mixes three different malts from Glenfiddich, Balvenie, and Kininvie. It’s smooth but isn’t aged as long which helps keep the cost down.

If Hemingway says it, then by God it’s true.

Learning how to start drinking whiskey or what kinds are the best can feel daunting. But like all things in life, it’s a game. Don’t shoot for the stars at first. Start drinking whiskey from the bottom and work your way to the top. Whiskey is full of amazing tastes and as you learn to appreciate it you’ll find that you’ll taste things like cinnamon, vanilla, coffee, berries, oak, lemon peel, and much more.

Plus whiskey has about 70 calories per 1 ounce serving. It’s the smart way to drink without gaining fat. If you have questions about whiskey or want to know more about the ends and outs of how you should start drinking whiskey (or maybe you want to send me a great bottle to try myself) email me at sidequestfitness@gmail.com or Tweet me on Twitter.

Before you leave, though, enjoy these fun facts about whiskey below. 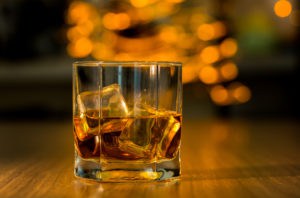 Fun Facts About The Elixir of the Gods