I could feel the fire billowing behind her eyes.

Chest high. Shoulders back. Her eyes burning with the ferocity of a thousand suns; her strike landed—hard.

“Robbie, I don’t think you’re really a bro. I think you put on a facade because you think it’s cool.”

Her words ricocheting through my skull.

Brain dead from my arduous trip back from Austin. My zombified brain ran through the immediate emotions I felt to her audacious claim.

I made the smart choice and went the fuck to sleep.

The next morning, the aftershock of her words continued to shake me.

I was flabbergasted that she would question a part of my identity. We’ve been together for almost a decade. I was a bro when we met, albeit a much more rotund bro, but a bro nonetheless.

Also, what the fuck is wrong with having bro tendencies? Do I have to only have one layer to my identity? 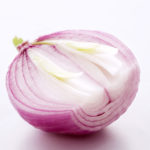 I spent the next 24 hours trying to put down on paper why I was so upset and pissed off from her attack. While sitting and fuming, trying to write these words down on paper, I thought of my grandfather.

Specifically, I thought about the world and generation he was born in. My grandfather grew up on a farm. Had it not been for him joining the Air Force, he would’ve remained a farmer for the rest of his life. Why?

Because, since the dawn of time, sons followed in the footsteps of their fathers.

How the world saw you, how you identified yourself to others, came wrapped up in your trade.

Google the history of surnames and you’ll find that many, like Smith, link back to an ancestor’s occupation.

For millennia, occupations defined our identities.

I can’t believe I’m about to make this reference. I blame my wife, but there is a song in High School Musical called “Stick to the Status Quo.”

One of the characters in the song is a basketball player who confesses that he likes to bake. After a brief musical number, the scene moves to a brainiac who divulges her passion for hip hop dancing.

As humans, we’re excellent at forming quick first impressions and making presumptions. Creating social perceptions of groups is as human as breathing.

Think about the times you’ve ever been in a gym and saw a guy wearing a tank top and repping out curls.

He could be the gazillionaire who made the App you email your mom on. But you saw him wearing a tank top and repping out bicep curls, now you file him away in your mind under “bro.”

Play by the Rules

The characters in High School Musical are expected to behave according to the favorable patterns within their group(s). This is known as ingroup bias.

Ingroup bias causes group members to act a certain way to maintain their inclusion. Bucking the status quo of your group is usually never encouraged.

We carry on the tradition of social perception, ingroup biases, and stereotypes as we enter adulthood. No relationship escapes this either.

What’s magical about today’s world is that you don’t have to stick to a status quo. You can—and should—have layers, like an onion.

In the past, geeks and nerds had to endure ridicule for our passions.

Whether it was basketball, soccer, or baseball I felt I had to hide parts of my own geektastic layer growing up.

Embracing 90% of my geek side happened in private—away from the people I called friends. (Until I joined those weird theater kids in high school.)

Revenge of the Nerds

Today, you’ll find athletes who at their core are just as nerdy. Two-time NBA Champion and 11-time All-Star, Chris Bosh of the Miami Heat, is a computer programmer.

Bosh admits that in high school he had to endure ridicule from teammates. He grew up around tech-enthused nerdy parents and their passion rubbed off on him.

One of the greatest NBA players of all time, Tim Duncan, is one of the biggest tallest nerds ever. Duncan is an avid Dungeons and Dragons player. He also loves attending to Renaissance Fairs.

Even NFL stars are giant nerds at their core. Indianapolis Colts star QB, Andrew Luck, is a nerd through and through. Not only is he a huge board game fan and Star Wars nut, but Luck uses Lord of the Rings references for audibles at the line of scrimmage.

Curt Schilling, 3x World Series Champion, and 2001 Series MVP admitted many times over his career that he was a huge gamer. He launched his own game company, 38 Studios, in 2006. Before the company filed for bankruptcy late in 2012, they released one of the best RPGs of the last generation: Kingdoms of Amalur: Reckoning.

Would you ever expect any of these superstar athletes to be avid board game players, computer programmers, or Dungeons and Dragons fans?

Millions know them as “the basketball guy” or “the quarterback.” Beyond that, they have similar layers to the rest of us.

The Man in the Mirror

Self-perception is important to your own sense of identity. So it’s only natural when you feel attacked to mount defenses and defend your character.

You should never hide from the world anything that you’re passionate about.

Hiding who you are and what you love means you’re living a caricature of your true self.

During the 200th episode of The #AskGaryVee Show, Gary Vee said this while answering a question:

If you’ve been thinking about starting a side hustle, a podcast, joining a gym, taking an adult art class, or learning how to ballroom dance, what’s stopping you?

Are you afraid someone in the class, the gym, or a friend will think less of you?

Fuck fear. Punch it in the face. Join that gym and kick its ass.

Get into that art class and connect with your inner Van Gogh.

Pull out your phone, go the voice recorder, and record your first podcast episode. The only person stopping your success is you.

Express yourself and be passionate about what you love. Even if your significant other or friends crack jokes, fuck em, always be YOU.

Here are a few things I bet some of my long time readers and friends don’t even know I’m passionate about:

You have one life to live. Never let someone stop you from geeking out about who you are and what you love.

What if you’re bodybuilder who knits scarfs and sells them on Etsy? Do it and fuck those think it’s weird.

You could be an All-American basketball player who loves baking pastries. As long as you don’t play for Duke, I’ll give your croissant a shot.

Or you could be a gamer who geeks out over 17th Century Spanish painters.

Never be afraid to take on another layer to your personality either. Tinker with new hobbies and discover as much cool shit in life as possible.

People you care about may not understand and that’s fine. You are who you are and they are who they are. As long as your 100% authentic in everything you do, who cares about the rest?

I’ll wrap this up with the best quote I’ve ever heard about why being a geek is awesome. 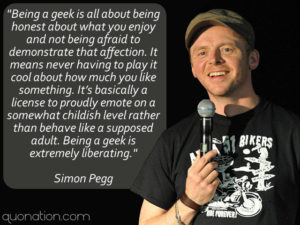 Free the Geek Inside

Of course, I’ll geek out over weight lifting—call it broing out if you want. I’ll also geek out over comic books, 90’s nostalgia, Star Wars, whiskey, Stone Temple Pilots, or poetry.

Never let the status quo or others perception(s) keep you from expressing what you’re passionate about.

Fuck the status quo, be an onion.