I couldn’t believe it when I saw it. Humanity had evolved and advanced past this, right? We had forgotten this grotesque hairstyle—killing it off like the Dodo.

Or, at least, I thought we had.

But in the wilds of New Hampshire, I saw it. Hanging from a man’s head like the tail of Davy Crockett’s beaver-skin cap: a mullet.

I understand that fashion tends to recycle every 15-20 years. But America, this is NOT a fashion trend we need to make great again. 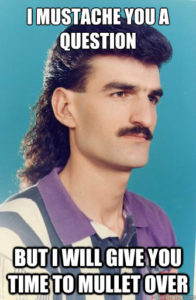 When it comes to recycling trends, though, the fitness industry is full of recycled training protocols.

Crossfit helped reinvigorate a passion for the Olympic Lifts. Superhero films have now sent more dudes back into the gym and reacclimated them with bodybuilding style workouts.

What was once forgotten has now been found again.

But unlike mullets, which are never cool no matter the decade, there are some forgotten exercises that you can add to your workouts to help you increase strength and add more muscle.

Deadlifts rule. It’s why we did an entire episode on them for Coaches Corner.

If you deadlift often, you’re probably familiar with variations like:

There is, however, a forgotten version of the deadlift.

Steve Reeves, winner of Mr. Universe in 1950, is credited with the invention of this style of deadlift.

This variation will help you build a wider, stronger, and more badass back. Not only will you build a back that intimidates a gorilla, but you’ll also improve your grip strength, and will help you feeeellll your lats more during the deadlift.

***NOTE: If your gym lacks bumper plates, this won’t be very easy to attempt.***

Load the barbell with 10-15 pound bumper plates. Grasp the edge of the plates instead of the barbell, hinge your hips, and pull the weight off the ground until you come to a standing position.

Spend a few weeks performing this deadlift variation and you’ll build a back that would make Hercules weep.

Who doesn’t love leaving the gym with a massive upper body pump? Your chest fills the air around you, your shoulders are the size of boulders, and your arms experience what I call “swoltality.” Getting a pump this good usually takes at least 30-45 minutes.

But what if you could get that massive upper body pump in half the time?

Well, you can. Thanks to the Curl and Press.

To begin, curl the weights up until they’re even with your armpits. Then twist the dumbbells and press the weight above your head.

You don’t need to go heavy here either. Keep the weight light to moderate and perform 3-4 sets of 12-15 reps.

Vince Gironda trained Clint Eastwood, Denzel Washington, James Garner, and Erik Estrada. And he may have single-handedly changed the sport of bodybuilding by himself.

One long forgotten exercise that he invented, that transforms your biceps from the pea shooters you carry around to cannons, is the drag curl.

This movement targets the long head of your bicep.

The key to this forgotten exercise is keeping the barbell as close to your body as possible.

Grab a barbell, holding it slightly outside of shoulder width.

Drag the bar up and over your chest until the barbell reaches your neck. While doing this make sure to push your elbows back as far as you can. This keeps the bar tight to your body.

Squeeeeeeezzzzzze your biceps as hard as you can at the top. Then slowly lower the bar back to the starting position.

This curl variation cuts out any activation from your front delts. Which leads to you growing a larger and more impressive set of guns.

If you’re looking to increase your strength and make gains in the gym, reacquaint yourself with these forgotten exercises.

But whatever you do, please for the love of humanity, don’t grow a mullet. 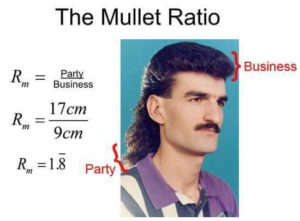