I hated working outside as a kid; I still do.

The heat of the summer sun, the sweat, bugs, the actual physical work involved, it wasn’t something I wanted to spend my summer vacation doing growing up.

He had weeds around his tomato plants that needed to be pulled up and, according to him, I’d watched enough Eureka’s Castle for one day.

Armed with weed killer, I assumed I could make quick work of our enemy.

Once we arrived at his tomato plants, like Yoda telling Luke he wouldn’t need his weapons in the cave, my grandfather told me to put the Weed-B-Gone down—you will not need it.

Ugh. He was going to make me do actual, physical work.

Avoiding work for as long as I could, I stood behind him as he knelt down in the dirt to begin his work.

His fingers became backhoes, cracking through the topsoil, exposing the dirt below.

Taking great care not to disturb the roots of his tomato plants, he worked to dislodge the weeds surrounding them.

Once he’d exhumed the dirt and found the roots of the weeds, he ripped them from their Earthen blanket.

Then with the same tenderness and care he displayed tucking me into bed, he made sure the plant could breath, had room to grow, and meticulously covered his tomato plants in their own blankets of dirt.

“Grandpa, why didn’t we just use the weed killer?”

He gave the dirt one final pat and turned to me.

“Robbie, it takes a little more work sometimes than using weed killer, if you want to get the best tomatoes. If you want to connect with your work, Robbie, you have to get your hands dirty.” 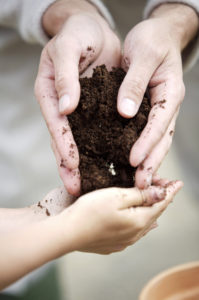 Our world today is full of crisp, clean, photoshopped images.

Instagram moments where the lighting is sublime, the angle is right, and everything looks perfect.

As an artist, specifically as a writer, there is a voice—a being—inside striving to tell his truth to the world at large.

With all my writing or podcasts, I’ve strived my best to be open and honest, as truthful as I can be.

For the most part, I’m a pretty positive person. I know that no matter the struggle, life always gets better.

That like a game, whatever challenge I face is only a test that will give me enough XP to level up. Each level growing stronger, smarter, and better equipped for the next challenge.

Here’s what I wish I could say to everyone who asks me about starting a podcast, writing, or being an entrepreneur.

I HAVE NO FUCKING CLUE WHAT I’M DOING.

Jon Snow knows more than I do.

I’ve basically imitated what the most successful people have said they did.

But the truth is, there isn’t a day in the last year and a half where I haven’t had to battle with crippling self-doubt.

Days where it feels like I’m the tomato plant surrounded by weeds trying to choke the life from me.

I love what I do. I’ve been an artist in one sense or another my entire life.

Now I’m doing it full-time: Creating content, writing, podcasting, spreading my geek flavored message to the rest of the world.

I do it knowing that as long as I stay consistent and keep pushing, eventually, success will come.

But that doesn’t mean there aren’t days where I want to throw in the towel and go back to being a cog in the machine.

Days where I spend the majority of my time staring at the ceiling searching for the words to write—begging the gods for inspiration.

I’m new to the world of entrepreneurship and business.

College was all theater and gen eds for me. I took zero business classes.

Minus the small family businesses I grew up around, I don’t know a lot about running a business.

All I know is what I’ve been told.

My good friend and bro, Nick Sorell said to me recently

“You’re one of the hardest hustlers I know.”

My response to him?

Annnnnnddddd, there it is again. Self-doubt.

Robbie, you’re not doing enough. You should be doing more.

Doubt has become the monster under my bed.

Except, now it’s a monster that waves from the bushes, snidely smirking as I work.

Is this working? Am I doing this hustle thing right?

When is this going to pay off? Will it pay off?

Should I just give up and go back to a cubicle?

My friend, and former podcast guest, Tommy Baker wrote this piece on Medium about the struggles of being an entrepreneur.

Reading it, all I could think was, “Oh good, I’m not crazy. I’m not the only one who feels like this sometimes.

It’s exciting to be your own boss and work from home, a coffee shop, or to have the freedom to work anywhere in the world.

But it is one hell of a roller coaster ride.

There are days or weeks where it feels like you’re in never ending emotional loop-de-loops and corkscrews.

Some of that is self-conceived notions. But, some of it’s not.

For now, my wife is making huge sacrifices by paying every single bill we have, while I hustle to get published, gain clients, and make a difference in the world.

Which adds a whole other layer of stress and anxiety and nibbles of self-doubt.

Doubt that stems from our cultural upbringing. You know, the one that told us the man is supposed to be the breadwinner—the provider, protector, the big cheese.

I think that’s where the greatest majority of my self-inflicted guilt about, “not working hard enough,” stems from. That I’m supposed to be the man, the one who brings home the bacon.

It’s bullshit, but I’d be lying to say I’m not affected by it.

Those Instagram posts of the entrepreneur life may get a lot of likes, but the majority of your work feels like it falls on deaf ears.

At times it feels like you’re screaming into a void—a vacuum where there’s no echo, no sign that your voice has been heard.

But you continue screaming, hoping that your voice lands in someone’s ear.

It’s at these times where it feels like doubt revs its engines, roaring like an angry chorus of motorcycles during bike week.

During this 18 month journey into the world of entrepreneurship, I’ve stressed myself out, pushed myself to near burnout, grown a few gray hairs, and had days where I wanted to say fuck it, I’m done.

Am I doing it right?

Will I get there?

Why is this so hard?

Shouldn’t I be doing more?

Why am I not there yet?

I hear questions like these from clients almost every week. And I know for a fact, even though they may not express them in emails, they deal with their own daily doubts as well. (Because we all do.)

Losing body fat, staying consistent with diet, saying no to drinks while out with friends, feeling like that pull-up is never going to happen, this is where the engines of self-doubt begin to rev.

But as Steven Pressfield points out in The War of Art, “self-doubt can be an ally. This is because it serves as an indicator of aspiration.”

We all have fears and doubts. But having those shows that what you’re struggling to achieve means something to you. Deep down you know that your goal is paramount to your growth as a person.

Doubt and fear are like the weeds my grandfather needed me to remove from his garden. Even after you remove them they continue to come back. It’s why farming or gardening takes so much work.

It’s not a bad thing, though. The weeds coming back is a good sign. It means you have fertile ground—dirt that is building and sustaining life.

If you continue to toil in the dirt, pulling the weeds (fighting The Resistance as Pressfield calls it), in time your plants will show progress.

You Reap What You Sow

My adventure into the land of entrepreneurship has been an interesting one. I have a lot of things to work on, not only in business but in my personal life. (Balancing work and life is a bit of a struggle for me.)

But if I’ve learned anything from helping my clients through their battles with doubt or fear it’s that the only way to defeat them is to continue moving forward.

To keep doing what’s been working and do it every day, because that’s how you keep the weeds out.

I struggle with obstacles, fears, and doubt everyday. But if I let those weeds grow, allow them to run amuck, I’ll never have tomatoes to harvest.

As hard as it may seem at times, words can’t express what it’s like to get an email like this:

Dude. I did push ups. I DID PUSH UPS. I’ve never in my life done knee push ups and yesterday I did 26! I don’t care that I can’t seem to do a skater squat because I feel AWESOME about doing a push-up.

It has been a year and the body I am currently inhabiting is stronger and a thousand times more kick ass than the one I had when we started. Thank you for the effort and encouragement. I appreciate it more than I can express.

Even better than that is watching a 46-year-old woman, who had been told her whole life that she needed to use light weights and do cardio, discover that she could deadlift 145 pounds.

And then as you’re leaving the gym turn to you and ask if you think she can lift 225 pounds in a year because:

“I never thought I could do anything like this at all. Never once in my life did I think I was capable of things like that until you came into my life.”

It’s moments like that, that make the work in the dirt worth every single second.

Maybe you’re struggling to hit your goal. The weight feels like it isn’t coming off or the scale won’t budge.

Recognize the self-doubt first. But then look at it and think about the increased energy you’ve gained, the space growing between your body and clothes, or the strength you didn’t think was possible.

Dig in the dirt, get the grime under your nails, scrap and claw, and when it feels like doubt and fear are coming from every which way, know that you’re doing something right.

That you’re growing in fertile ground.

Because when the plant you’ve sown ripens, when you cut that tomato up and put it on a sandwich, and taste the succulent sweet success of your labor, nothing in the world feels better.
It’s easy to go to the store and buy a tomato. Anyone can do it.

But you miss that connection with the food. That sense of accomplishment that your hard work paid off. 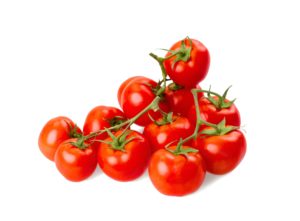 The Magic of Manual Labor

Sometimes I wonder what my grandfather would think of my pursuit as an internet entrepreneur.

For him, there was nothing more satisfying than the moment he could pick one of his tomatoes, take it inside, slice it up, and put it on a sandwich.

I still remember the day we walked to his garden and picked the tomatoes off the plants we had been toiling in the dirt with.

He cleaned them; sliced them; put them on a sandwich and handed it to me. He could tell from my expression it was the best tomato I’d ever tasted.

It’s good, right? Best tomato you ever had?

That’s because, Robbie, nothing tastes better than something you had a part in making.

We all struggle. If you feel like you’re in the weeds now but aren’t seeing the results you want, let me help.

Tell me below what you’re struggling with and we’ll chat about action steps you can take to harvest results.